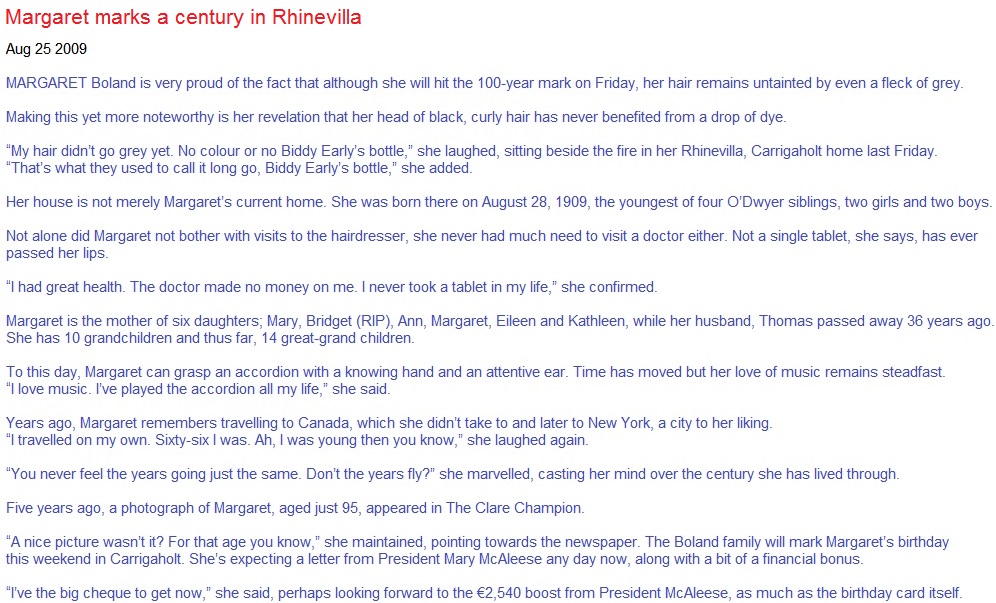 The sound of gentle crackling of flames fills a room that is sprinkled with numerous black and white family photos. The seaside breeze hisses beneath the rafters at the home of Carrigaholt’s oldest resident.

As she speaks, Margaret Boland’s eyes glisten with thousands of memories. This is the 103rd birthday she has celebrated and some might forgive her for growing tired of the ritual.

She has lived through a century, experiencing events that have been confined to history books for most. Yet she has hardly set foot outside of West Clare. Born and reared in the rural seaside village of Carrigaholt, she bid farewell to her siblings at a young age as they set sail for New York.

“She stayed behind,” her daughter Margaret Jr explains. “I think she just liked to be home to look after her mother. She died at 84.”

A black and white photo of her mother sits atop a table. The resemblances between mother and daughter are uncanny.

The birthday star pipes up for a moment to reveal her secret to maintaining such good health.

“I never drank,” she says. “I never smoked. No alcohol, nothing. I never took a tablet in my life.”

The benefits are there for all to see. Blessed with curly brown hair and eyes filled with youth and a devilish smile, one could be forgiven for mistaking her for a lady of much fewer years.

“Wonderful, isn’t it?” she smiles. “The hairdresser told me ‘you have beautiful hair’. I don’t need to dye it. Nobody would think I was 103.”

One of her great passions is music. A keen singer in her youth, Margaret proudly says “every singing competition I entered, I won”.

The local Irish college, Coláiste O’Curry, celebrating their centenary this year, was her musical platform.

“She played the accordion all her life,” Margaret Jr adds. “She played at the Irish college. They were young, maybe 17 or 18. Music was a major part of her life. Things you’re passionate about stick in your mind when you’re young. It’s marvellous to see her passion still exists.”

Her set-dancing partner of many years was her husband, Thomas. They met at the Kilkee Races in 1937, before marrying two years later. They raised six girls – Mary, Anne, Margaret, Kathleen, Eileen and Bridget – who would go on to introduce 10 grandchildren into the family.

“He was a farmer,” Margaret Jr says. “They would work on the farm together up the road. He was a lovely person. A very jolly man and was very outgoing. He’d talk to anybody and was very well liked. They used to always be set dancing together. They’d go to a lounge in a pub and they’d always be dancing there. They would have been known as the musical duo.”

Thomas passed away 39 years ago, though she still wears her wedding ring. More heartache was to befall the Carrigaholt native. Her daughter Bridget died in New York in 1995.

“Margaret Jnr explained, “She died of skin cancer. She was only 53. That definitely had an effect on her.

These things could have been detectable – melanoma is curable.”

Margaret is still very independent. While her youngest, Kathleen, takes care of cooking and washing up, Margaret takes it upon herself to read, watch the television and relax by the fire.

“She loves reading her magazines every week,” Margaret Jr says. “She gets her newspapers every day and she tells us what she’s read in the paper. She’ll be reading about herself now,” she added.

With the waves lapping against the rocks outside and the gentle breeze casting a mesmerising ripple through the acres of grass, this is a view Margaret has experienced for so long. There is no other place on earth she would rather be, than perched by the fire, gazing upon the area she has known for 103 years.

“My battery’s still going,” she says, with a mixture of pride and mischief, “I’ve a great heart”.
She has lived through two World Wars, the Black and Tans and the Civil War. She has experienced the loss of friends and family. However, sitting upright in her armchair, her eyes are brimming with memories of a life of fulfilment and happiness.

Many might grow tired of their annual celebrations as they grow older; Margaret in contrast quips with a line that encapsulates her spirit and thirst for life – “I can’t wait for my 104th birthday”.