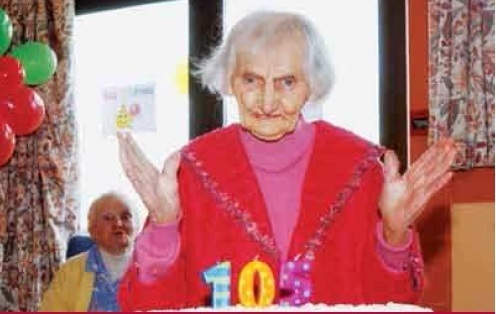 KATHLEEN MURRAY would have seen many recessions come and go in her long lifetime, so the latest one was never going to spoil the lively celebrations in Sacred Heart Hospital, Roscommon, for her 106th birthday last Thursday.

The birthday girl sat proudly in her chair as she overlooked a room full of music, dance, food and laughter. She may not be fit enough for dancing anymore but her lifelong love of music was there for all to see as her foot tapped along to the guitar melodies.

The music was provided by Niall Desmond and Lynn Tracey, and the elderly residents of Our Lady’s Ward joined in to provide some fine harmonies to old favourites.

Four generations of family were present with Kathleen last Thursday, and others who joined the party were friends, fellow residents of Sacred Heart Hospital, nurses and staff. Kathleen’s grand-nephew, Oliver Geoghegan, made the trip from Thurles, County Tipperary, for the celebrations.

Teresa Kennedy (Kathleen’s niece) and her husband Thomas came up from Ahascragh, and two-year old Annie Mitchell from Moore was brought along by her grandparents Tommy and Maureen Mitchell from Shannonbridge.

Born on November 6th, 1902, Kathleen was one of five children born to Mary and Jack Murray from Crannagh, Summerhill in South Roscommon. Her family was from a farming background and Kathleen trained as a cook. She never married and worked as a priest’s housekeeper in Athleague for some time. She was also employed for many years as a cook with McNeill’s undertakers and Nayler’s Chemist, both in Athlone town.

Her niece, Teresa Kennedy, reckoned a love of the outdoors must have contributed to Kathleen’s long life.

A letter and commemorative medal was sent by President Mary McAleese to honour Kathleen’s milestone.

THE SITTING room at Our Lady’s Ward in the Sacred Heart Hospital in Roscommon was awash with colour as Kathleen Murray from Athlone celebrated her 107th birthday surrounded by friends, family and many well wishers who gathered to celebrate the long life of this remarkable woman.

Kathleen was born in Carnagh, Summerhill near Athlone on November 6, 1902. During her working life, renowned for her culinary skills she worked as a cook in McNeill’s Pub and undertakers and at Naylor’s chemists in Athlone, later working as a Priests house keeper. She spent most of her working life in Athlone, a place she loved and even in recent years would love to visit.

The last surviving sibling of four sisters and one brother, Kathleen has resided on Our Lady’s Ward at the Sacred Heart Hospital since December 1998. She has remained healthy and happy, enjoying a wide circle of friends among those who reside there and the many people who come to visit.

One of her abiding loves has been traditional music and she was not to be disappointed as part of the entertainment last Friday was provided by Frances O’Grady and her group of musicians, dancers and singers with the odd recitation thrown in for good measure. The entertainment had begun earlier with Joachim Dunne providing the music and his songs were well received by the large attendance. It would not finish there however as the Folk Group of the Sacred Heart Hospital entertained those gathered with beautiful music and songs to finished up the evening.

While Kathleen was unable to join in the dancing she thoroughly enjoyed herself and many people believe that she will be back enjoying a spinning jig before too long like she did on her 106th birthday. She is also known for the occasional nightcap, Harvey’s Bristol Cream being her favourite and enjoyed a drink as she watched with great pleasure all the dancing going on around her.

Though Kathleen has been bed bound for the last nine months, the staff added that they do not think it beyond the bounds of reason if we see Kathleen up and dancing again for her 108th birthday.

It is believed that Kathleen is Roscommon’s oldest citizen and among the oldest in the country. Some have attributed her long life to the fact that she never married and enjoyed a cigarette until she was 96!

One of the many gifts presented to Kathleen was a medal from the President of Ireland Mary McAleese and it was also confirmed that a special case would be constructed to hold all seven medals that she has received since she celebrated her 100th birthday in 2002.

Relatives from all over the country made the journey to Roscommon to join in the celebrations with good wishes coming from her many relatives in the USA and Britain.

The editor and staff of The Voice would like to congratulate Kathleen on reaching this magnificent milestone and we all wish her the very best for the future.

An Athlone woman is now the second oldest person in the State after she celebrated her 108th birthday last weekend!

The incredible longevity of Kathleen Murray – a native of Crannagh, Summerhill – was celebrated with a small gathering of relatives and some music at the Sacred Heart Hospital in Roscommon on Saturday last, November 6.

Kathleen, who never married, had always been very fond of music and singing. Born in 1902, she grew up in a farming family and trained as a cook.

She went on to work as a cook at McNeill’s undertakers in Athlone. She also worked at Naylor’s chemist in the town and then became a priest’s housekeeper – a position she held for many years until her retirement over 40 years ago.

A lover of the outdoors, Kathleen enjoyed gardening and long walks in the countryside.

She developed a wide circle of friends and enjoyed socialising with them on a regular basis. She also smoked 20 cigarettes a day until she moved from her home in Summerhill to the Sacred Heart Hospital in December 1998.

Kathleen had four sisters and one brother, all now deceased, though she is still visited in Roscommon by her nieces. She is currently confined to her bed.

A commemorative medal from President Mary McAleese has been awarded to Kathleen for each year which has passed since her 100th birthday.

Julie Silke-Daly, Director of Nursing paid tribute to the staff at the Sacred Heart Hospital for their dedication to Kathleen and all of the other residents in Our Lady’s Ward.

Tributes were paid this week to Athlone woman Kathleen Murray, who died on Friday last 108 years and 13 days after she was born. According to the office of the President, she was the second oldest person in Ireland.

The funeral Mass for the Crannagh, Summerhill, native was celebrated by Fr Ray Milton at St Brigid’s Church in Drum on Monday.

Kathleen had been a resident of the Sacred Heart Hospital in Roscommon for the last twelve years, and a spokesperson for the HSE paid tribute to her longevity. “Connaught’s oldest citizen passed away peacefully last Friday, not long after celebrating her 108th birthday,” said the spokesperson.

“Kathleen’s gregarious nature won her many friends over the years. Her extended family and the staff at the Sacred Heart Hospital are left with many fond memories of her.

Though frail, Kathleen remained steadfastly assertive, honest and generous until her passing and she was an inspiration to us all.”

Earlier this month, her 108th birthday was commemorated with a small gathering of relatives and some music.

Kathleen never married and, remarkably, she smoked 20 cigarettes a day until she moved from her home in Summerhill to the Sacred Heart Hospital in December 1998.

Hailing from a farming background, she grew up in a farming family and trained as a cook.

She went on to work as a cook at McNeill’s undertakers in Athlone and, poignantly, it was McNeill’s which organised her funeral arrangements.

Kathleen also worked at Naylor’s chemist in Athlone and later become a priest’s housekeeper – a position she held for many years until her retirement over 40 years ago.

A lover of the outdoors, she enjoyed gardening and long walks in the countryside. She belonged to a very musical family that loved to sing and dance.

Kathleen had four sisters and one brother, all now deceased. Her brother, Michael, worked in Summerhill Convent until he was 90 years of age.

Following the funeral Mass on Monday, her burial took place in Drum cemetery. May she rest in peace.

CHRONICLERS NOTE : An interesting case, where reports, presumably including state verification protocols, are consistent as to stated age; however the official documentation, backed up by cross-checking with records of siblings, establishes a lower final age by a margin of 90 days.